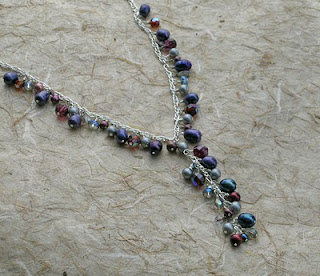 Have a look at some dressier and glitzier pieces- the Celestial Y-necklaces will be seen in many more colorways in the near future- so let pearls and crystals bedeck your bosom this year!

Plus many more jeweltone pieces, some ethereal, some substantial will add exuberance to your holiday season. The slideshow to the right will give you a taste of the spice and spirit -->
Posted by AlienBeadings at 12:38 PM No comments: 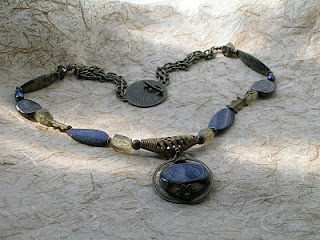 The array for Fall 2010 is varied and interesting: There are some earthy Luxe pieces with gorgeous gemstones (lapis, garnet, citrine, pyrite) and handmade artist-credited lampwork and raku ceramics. There are some Fierce Neutrals, which are spunky go-with-everything shades, accent on earth tones. And then there are the Tribal Inventions- featuring intricately carved stones, unusual painted african beads, vintage african brass and metal work and above all, a passion for texture and color.

In case you didn't know, this season Pyrite is the new IT stone- half metal, half gemstone, with gorgeous striated inclusions. You'll see some triangular column beads, stately and geometric as well as natural pyrite ("fool's gold") chunks. And pyrite is found included in the exquisite Lapis pieces in "Flow", shown above.
Posted by AlienBeadings at 1:32 PM No comments:

It's Impractical: or the Necklace Nobody Can Have 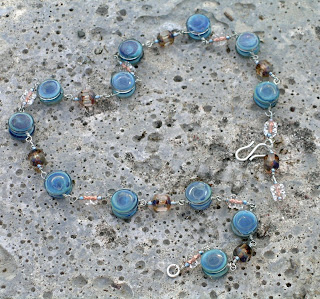 Sometimes art follows the Way that Cannot Be Taken. If this sounds like the words of a Sophist, it's probably because I'm trying to bend my mind around reason while flirting with passion.

These beads...They don't have holes. Logically they're not beads then. But if being a bead means being used as a bead, then these sweetly formed globules of glass are beads by nature and assignment. It seems quite possible that the first strung items were bits of bone and other natural things without boreholes. Ancient shamans probably wore notched treasures on plant fiber or sinew. So why not me?

These crazy little flat rounds are notched in the center, but have no through hole. Like a yo-yo, you wind cable around them to spin a necklace. Yo-yo beads are pretty magical. I've studied a bunch of beads and I have yet to imagine how they're formed. Each one is a bit of an idyllic June day- creamy clouds swirled with the blues of a perfect sky- the lightness of air and imagination.

And they were orphaned in my favorite bead shop. I'd seen them many times before, when they were part of a package of wonderful glass from an artisan manufacturer. All their relatives in gorgeous borosilicate were chosen and spirited away by admiring beaders. And these few stayed behind, a victim of their own ingenious design.

Oddness attracts me, though, and I wanted them now more than ever because of the challenge they presented. The shop owner had marked them down a little from their original extravagant (but worth it) price, and wanting to keep the family together, I took all of them in one fell purchase.

And after a while of matriculating in my stash, with me fondling them from time to time, wondering what reasoning I'd used to acquire them, I finally wired them with a few copper-lined rondelles and some Czech cathedral beads that look as if they were made in the 18th century and buried in the Black Forest.

That's it. No pendant, nothing fancy, no other colors - just set them plainly between mainly clear glass with a few glints of earth ore. Like a piece of new age music, they're the same note played over and over, beginning and ending in the same place. That's the opposite of my way of designing, where the basic theory is start with something and keep adding variations until the starting point is an unrecognizable infinity away. This needed a mastery over beads that miss the feature that makes them beads. And that made a piece that's simple, spare and tranquil.

And will remain mine. Serenity is too expensive to give away.
Posted by AlienBeadings at 9:21 AM No comments: 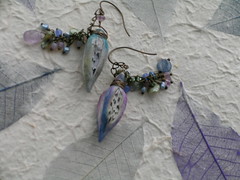